SIlicon Aggies and the 2nd Inning for AgTech

Agriculture is one of the least digitalized industries. A decade ago, agricultural investment wasn’t even mainstream. It was an alternative investment in the hands of a few, not in the hands of Silicon Valley venture capitalists (VCs). An agtech unicorn was born in 2013 with Monsanto’s billion-dollar acquisition of Climate Corp. It triggered VCs’ attention in this new digitalized agriculture and ever since, the surge of investment has been remarkable. According to AgFunder, global investment in agtech was 10.2 billion dollars in 2017, five times greater than in 2013 and more than twenty times that of 2010. Agtech/foodtech space continues to be very hot and a 20 percent y/y increase is expected for 2018. Despite this exponential growth, agtech and foodtech are only in the second innings with decades of growth ahead of us. To be sure, there will be potholes along the way, but I am confident we have a very promising and upward trajectory over the next 20-30 years. I am thrilled to see the huge interest in agtech as it’s my domain expertise and ability to contribute to these new ventures.

As with every new industry disruption, a key event triggers the motion—in the case of agtech it was the acquisition of ClimateCorp. Investors with or without expertise rush in to make money. With unrealistic expectations. Many investments fail or in the case of the few successes, quick sell-off and profit taking lead to hopelessness and dissolution, resulting in a huge decline that could last several years. New reality is set in with more know-how and selectivity, leading to recovery and eventual spawning of a mature industry. The hype cycle may be more pronounced because the agricultural industry is more complex than IT and requires special expertise and understanding. It is highly regional, very unpredictable, low-margin, and not easy to quickly grasp. It is not straightforward like building a software company or developing an app. Agriculture constitutes a huge value chain; from upstream encompassing production and farm management, all the way to the downstream, groceries or restaurants, all having their own business models. Because of this complexity, we need to connect directly with growers, or people who have deep domain expertise in this industry. The lack of real expertise in agriculture, in Silicon Valley, leads to people misjudging the industry. This is most notable in assigning wrong valuations to companies, which is causing over-valuations in many cases. Of the nearly a thousand deals in 2017, most will likely fail, making it a high-stakes game with these high valuations.

Investments were made along the entire agriculture value chain; from upstream (farm management and production) to downstream which is consumer facing e-commerce, grocery and food delivery. Upstream is more complicated in comparison to the downstream market. We had a 32 percent increase year-over-year in dollar amount, but the deal numbers declined nine percent, with 625 unique investors upstream. Unique investors are not necessarily new but entering agtech as a new area for investment.

A prerequisite to a healthy industry is a healthy pipeline to ensure sustainable growth and an upward trajectory. The seed, angel and Seed II stage investments are feeders into the pipeline, so we had many investments in seed stages. Despite being satisfactory in 2017, seed investment numbers are declining which is worrying because not maintaining a healthy pipeline will become an issue as picking becomes slim for more de-risked ventures.

In terms of global investment and number of deals per country, the U.S. is unquestionably number one among major investors in agtech, followed closely by Canada, China, and EU. These countries are increasing their investments in food and agriculture. Money has been sloshing around due to extremely low-interest rate policies around the world for the past decade. As access to cheap money changes gradually, investors are expected to be more valuation conscious. 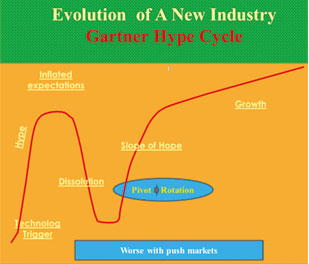 In terms of current areas of interest where the dollars are going, because farmers are concerned with labor expenses, they are very interested in automation and robotics. There are still huge potentials and great opportunities since this is still a young industry. People are making good progress in terms of robotics in the farm and one can even see robotics in restaurants and across downstream segments. There’s substantial investment in plant-based proteins and other alternative proteins such as lab-grown meat and eggs and insects. Exorbitant valuation suggests much hype in the space. As we are in the second innings, there is still enormous potential—tremendous opportunities in alternative proteins, indoor farming, farm management, biotech, robotics, you name it.

With low hanging fruits in agtech having been picked, being cautious and especially trying to go in things you understand is wise. Investors must be patient and mindful of valuations, not paying the exorbitant current valuations, find their niche, and stay with the strategy that they know and understand. The right entrepreneur with the right business model is essential. And, it is important to have a pull, not a push market and a defensible platform, not a one trick pony. It’s not just that you need to have a big market. In agriculture, markets are big, but you would do better with a pull market. Agriculture awaits the same fate that companies faced during the run-up to and culmination of the dot-com bubble. A lot of startups would die with a few like Amazon, Google and Apple becoming giants. What companies will be the next generation trillion dollars winners? Who knows?

A Quantum Jump in the Flexibility of Automation: The New Generation of Mobile Robots

Four Technologies to Watch for in the Agricultural Space

Copyright © 2021 www.appliedtechnologyreview.com All Rights Reserved | About us
Top
This content is copyright protected